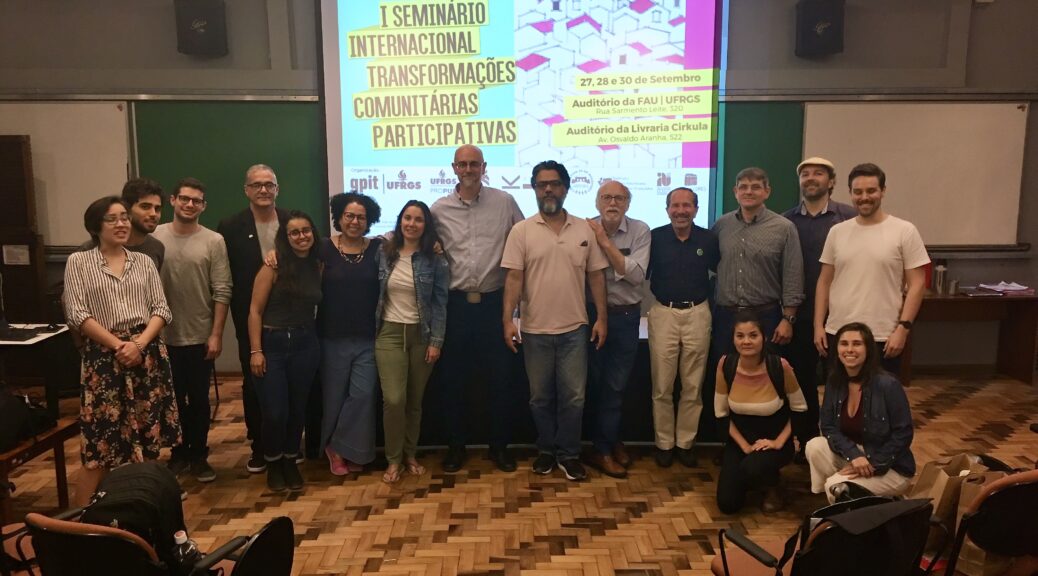 Community Participatory Transformation is a joint research project between the Center for the Study of Brooklyn and the School of Architecture and Urban Planning, Federal University of Brazil, Porto Alegre (UFRGS).  I created a joint agreement with Prof. Eber Marzulo for a five year comparative research study (2019-2024) between Brooklyn College and the Federal University of Brazil, Porto Alegre on participatory democracy and urban social movements with a focus on participatory budgeting, housing, cooperatives, and sustainability.

The Center for the Study of Brooklyn hosted the first visit in May 21st. 2019 with community-based researchers in Brooklyn, faculty from the New School and Brooklyn College faculty and students.

The second meeting was a Seminar on Participatory Community Transformation hosted by UFRGS in September 2019, and there have been three Skype public events since (see my CV).

In November 2020 we collaborated again, inviting our guests from guests from Brazil and Puerto Alegre to present for CUNY’s School of Labor and Urban Studies.

The first publication from this partnership is Menser (2020, in press).

While in Brazil, my second site visit was to a sewing cooperative on the outskirts of Porto Alegre called Justa Trama. This place was an interstellar explosion of participatory democracy. They are a sewing coop of more than 40 women, buy their cotton from a mill which is a worker coop of more than 400 members, and they get their cotton from farms that are coops and grow their cotton organically! There is some info in English here: https://b2brazil.com/hotsite/justatrama

This place is remarkable on so many levels: first off, it started by making tote bags for the world social forum that took place in 2004 in Porto Alegre. I received their bag when I went in 2005! Since then their coop was able to grow in large part to participatory budgeting. They got money from PB to fix up the building, pave the adjoining streets and also get sewage lines in their neighborhood which is a self built settlement but now has full services. Their building is powered by solar panels and they do their own rainwater catchment! And now they make shirts, dresses and dolls. But there is more, they also have their own credit union which issues a local currency in which the workers are partially paid in and is used to promote purchasing with all the other local businesses! Justa Trama then not only co-created a sustainable and democratically owned supply chain, they helped to democratically develop their neighborhood by improving infrastructure and services and by creating good paying jobs, especially for women.

In Conversation with Felipe Samuel